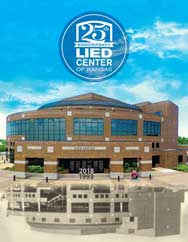 The Lied Center of Kansas opened on Sept. 28, 1993 and was built through the generosity of the Lied Foundation Trust and the Lawrence community. It is dedicated to Ernst F. Lied’s parents, Ernst M. and Ida K. Lied. The inaugural performance of The Secret Garden set the stage for the important role The Lied Center now plays for KU, Lawrence and the people of Kansas. Today, the Lied Center is the home of two outstanding performance spaces: the main auditorium, with a capacity just under 2,000, and the Pavilion, a flexible space with seating for 200.

Ernst F. Lied came to the University of Kansas from Kansas City, Missouri in 1923. His father managed an automobile dealership in Kansas City. While at KU, Lied was chosen and elected to secretary of the Sphinx Society, a freshman honorary for men. The next school year, Lied’s classmates voted him vice president of the sophomore class. He made the honor roll and the University Daily Kansan described him as one of the best known and best liked men on the Hill. He lettered in golf in 1925—the same year the golf team took first place in the Missouri Valley League.

In the spring of 1925 Lied departed KU for the University of Nebraska when his family moved to Omaha where his father took a position at a car dealership. Lied graduated from UNL and followed in his father’s footsteps, running a successful General Motors dealership in Omaha. In 1944, Lied hired a young assistant, Christina Hixson of Clarinda, Iowa, fresh out of high school who attended Commercial Extension Business School.